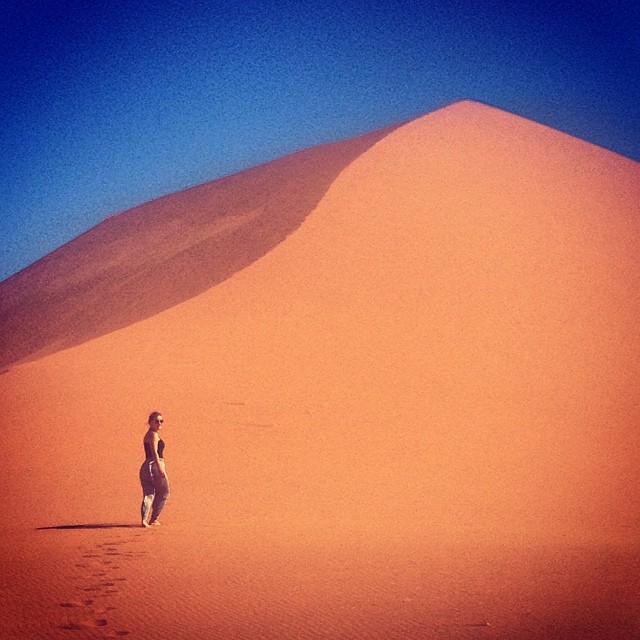 Namibia is a beautiful country with ever changing and breathtaking landscapes. From the crashing waves of the ocean to the rolling sand dunes of the oldest desert in the world shining bright orange in the sun, to the cliffs of Spitzkoppe. Everywhere you look it seems as though you are in another world. The beauty of this earth is extraordinarily demonstrated in the landscapes of this diverse country.

Etosha National Park was our first stop. The park is filled with plains of deep contrasts between blue skies and yellow sands. We arrived at our campsite just before sunset in time for more rain. Our tents were already soaked from the previous days rain and a pool soon formed at the bottom of my tent. So much for “waterproof tents” The campsite was on the site of an old German fort. I climbed to the rooftop to watch the sunset before having dinner and calling it a night. We had an early morning game drive the next day and with a wet tent I figured I would not be getting a very restful sleep.

I woke up early the next morning after a restless night of tossing and turning, trying to dodge puddles of water. I folded up my mini swimming pool that was acting as my tent and climbed onto the truck for an all day game drive. Our first stop was a waterhole it was quiet and pristine in the morning light. It looked like a glass mirror that reflected the sky perfectly. This moment of beautiful silence seemed to make the restless night worth it. As we drive away from the water hole we noticed a lion sleeping in the middle of the plains. How peaceful that lion slept knowing he was king and no other animal would dare disturb him.

Throughout the day as the landscape changed from yellow sands to green bushes and back again, we saw herds of giraffe, zebra, impala, springbok, kudu and numerous lions.  We were lucky enough to see a mother cheetah and four grown cubs in the distance stalking a wildebeest and at the end of the day as we were driving out of the park a majestic loan elephant stood by the roadside to watch us drive away. He was an old bull that had been kick out of his herd. Elephants are mystic creatures, the way they move with their massive bodies, hardly making a sound. Such gentle giants. Seeing an elephant at the end of the day really finished off the day on a high note.

Our second campsite was right outside of the national park on a little farm and we made it there once again just as the sun was setting and the rain was starting.

The next day was our visit to Cheetah Park. Our drive times in Southern Africa have been much shorter than in Eastern Africa. I think better road conditions and infrastructure played a huge part in this but nonetheless we were at cheetah park in just a few hours and had some time to laze around in the afternoon before going to see the cheetahs.

Cheetah’s are not endangered in Namibia and there are plenty of them. As a result it is not illegal to kill cheetahs in Namibia and because Cheetahs often hunt farmers livestock, farmers often exercise their rights to shoot and kill cheetahs. As a result Cheetah Park was started as a sanctuary for cheetahs who would be killed if they were released back into the wild. At about 4pm a truck came to pick us up and we went to see the parks cheetahs. There are four tame cheetahs who were born in captivity. You are able to sit with and walk with these cheetahs, you can even pet them and if they approach you they will sometimes lick you.

If you think a domestic house cats tongue feels like sandpaper then you are in for it when a cheetah licks you. A cheetahs tongue feels like a sand paper machine. Scraping every possible dead skin cell from the surface they are licking. I had a cheetah lick my arm, he was purring which sounded a bit like a low growl and my upper arm is pretty close to my face, too close to feel comfortable with a cheetah licking you. Nervously I posed for a photo and then tried to slowly back away. We had an hour to spend interacting with the cheetahs and we got to watch a feeding and then we were loaded back into the truck where we drove through two separate sanctuaries to watch the feeding of the wild cheetahs. The owner of the sanctuary threw a piece of raw meat into the air and all of the cheetahs lunged for it at once. The dominant cheetah got the meat and ran off into the bush to eat in peace. The process then repeated itself until the last cheetah was fed.

The next day we drove to Spitzkoppe. The rocks of Spitzkoppe are 700 million years old and the peaks of the mountains stand out drastically against the surrounding flat plains. The San people, the indigenous hunter-gatherers of Southern Africa, left famous rock painting there some 4000 years ago in what is now called bushman’s paradise.  The campsite was a bush site. No running water and no facilities. It was barren in the middle of rocks and sand with no shade and no vegetation around. I spent the afternoon climbing rocks and visiting the paintings at bushman’s paradise. In the evening we climbed a mountain and watched the sunset over the peaks of  the Spitzkoppe rocks. We decided we would sleep outside under the stars and hiked up to a flat peak on the top of a mountain to lay out our sleeping mats and sleeping bags and sleep under the African stars.

No tents required. As soon as the sun went down the temperature immediately dropped. We quickly set up camp and snuggled into our sleeping bags to watch the stars. With no lights around for miles the stars shone brighter than I had ever seen them. It was a perfectly clear night and laying on my back looking up at the sky I made wishes on the numerous shooting stars and drifted off to sleep. I would wake up every few hours and stare at the sky in amazement, as the time shifted so did the entire sky. Constellations that were behind me when I fell asleep would suddenly be directly over me and then in front of me as I drifted in and out of sleep. I could lay under that sky happily every day for the rest of my life and watch the stars shoot by.

This world is so beautiful. If only we took the time to stop and appreciate the beauty all around us more often. We woke up in the morning just before sunrise and hiked back down the mountain. On my way down I saw three wild donkeys stopped to drink at a water hole. I didn’t have my camera with me and instead I just paused and watched them for a while, fully taking in the moments before I continued my hike back down to where the truck was waiting. That morning we had a short drive to Swakopmound where we were upgraded to dorms. Another three days of not setting up or taking down a tent was a welcome treat. I was looking forward to sleeping in a real bed for the first time in months.

Swakopmound is a quant little German looking town with pristinely clean and tidy streets lined with old colonial buildings. The first two days in Swakopmound were spent exploring the town, shopping in the local markets and just taking some time to recharge. My last day in Swakopmound was spent in Walvis Bay. Walvis bay is only a short drive from Swakopmound but was considered South African territory until the 1990s. It’s a small little town on the Atlantic Ocean. The waterfront is lined with shops, restaurants and boardwalks filled with friendly seals jumping up on them and hoping you will offer them a piece of your lunch. We spent the morning there and had the taxi returning to pick us up around two. Which in retrospect was not enough time. I definitely could have spent a few more hours there taking it all, exploring and taking pictures of the seals, pelicans and flamingos.

My last night in Swakopmound was spent having dinner at a Chinese restaurant with my tent mate who had been bed ridden and very sick for the past few days. We settled in for an early night. The next day we were crossing the border to South Africa. 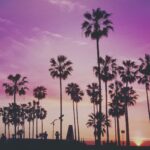 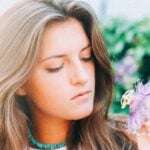