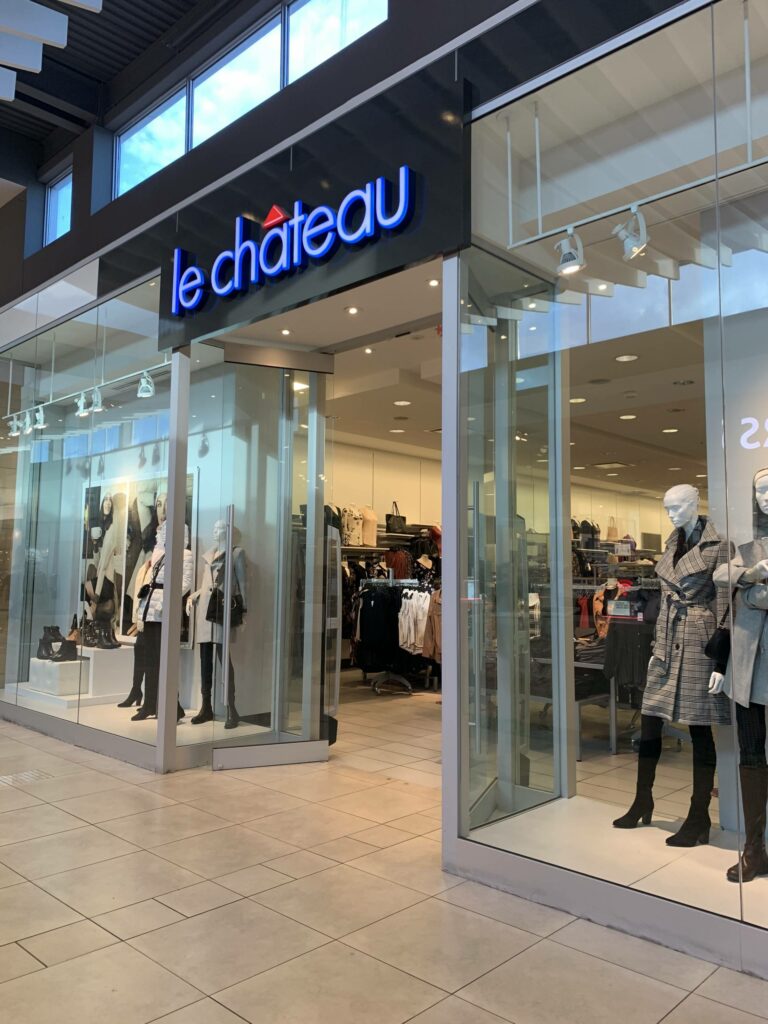 It was just over 20 years ago that I went in for my first interview. They weren’t hiring seasonal staff at the time, but I knew that I could convince them to bring me on early. A 17-year-old who had a love affair with fashion and a decent amount of confidence, was about to go in for her dream job.

I selected a camel suede miniskirt, a fitted black turtle neck, and black knee-high boots. It was on brand, not too trendy, polished, and the heel was a practical height but also a good example of something that I could work a five hour shift in. I got the job on the spot and in that moment, Le Chateau became my home away from home for the next decade.

Le Chateau was where you used to go to buy a new top for the bar, a dress for your birthday, or a velour tracksuit to wear to lectures. No one had to ask where you got your outfit because it was that identifiable, that iconic, and at the time, one of the only places in Canada to get something so fashion-forward.

“I will apologize for the micro eyebrows and the blue contacts, but never for the fashion choices.” – Kristen Vizzari

No one had to ask where you got your outfit because it was that identifiable, that iconic, and at the time, one of the only places in Canada to get something so fashion-forward.

Founded in 1959 by Herschel Segal, Le Chateau began as a menswear apparel store in Downtown Montreal that began selling overstock from his father’s store. The company had modest success and expanded to three locations in its first two years. By the third, Le Chateau came close to bankruptcy and Segal closed all but his original location in Victoria Square.

Segal knew he needed to differentiate. He expanded into womenswear and began importing high-quality fashions from Europe. This model worked for the next decade and by the end of the 70s, there were over 50 Le Chateau stores across Canada. By the early 80s, Le Chateau switched from selling high-end imports to mostly mainstream fashion, and by the early 90s, the company was doing most of it’s designing and manufacturing.

This is where my Le Chateau memories begin. I can vividly recall trying on items in my mother’s walk-in closet and begging her to let me wear her new shag jacket on a school trip when I was in the sixth grade. Growing up in a small city in Niagara, Ont., my fashion exposure was limited but I still knew that pieces from Le Chateau were different; they were special.

When I started making my own money in high school, Le Chateau is where I went to buy a fur-trimmed cardigan for dress-down day or a pair of glitter bell bottoms for a Much Music video dance party. They weren’t things you could wear everyday, but that is why I loved them.

My best friend and I on New Years Eve in the early 2000s. She borrowed my black catsuit and wide studded belt. I opted for a satin crinkle top paired with satin wide-leg trousers.

By the early 2000’s, Segal recognized the “disposable fashion” stereotype and vowed to invest more time and money into improving garment quality and changing public perception. Collections became more structured and deliberate, but they were also more frequent. When the PK (Product Knowledge) book would arrive, I would spend my breaks engrossed in the pages, picking out my favourites and praying that my A level size store would get them. Of course I wanted them all for myself, but even at 19, I had quickly acquired a regular customer base and I was excited to style the collections on them. For me, the greatest joys were working with my colleagues, being surrounded by clothes, and helping people find outfits that made them feel beautiful and confident.

Asymmetric necklines and suede fringe belts were a thing.

After graduating from university and getting a full time job, I stayed on at Le Chateau for one day a week. I would like to say that it was driven by a 60:40 split between the fifty percent discount and a genuine love for the job, but in all honesty, it was probably closer to 75:25.  I would leave for a year or two when life got busy, only to return again when I started my graduate program. I cut ties for good in 2011, right before the company underwent a major rebrand. International competitors like H&M and Zara were gaining market share, and Le Chateau made the drastic choice to abandon the younger, trendier customer in favour of producing quality, “grown-up clothes” at various price points.

I’m no corporate marketing strategist, but I have long questioned this business decision. Now, with the news of Le Chateau closing and liquidating its remaining 123 stores, I can’t help but think that this was the beginning of its demise as a major Canadian fashion player.

Part of improving the quality of their garments meant that at least 30 per cent of the design and manufacturing was going to be done in Canada – “Made in Canada” sells itself. Why was this was never on billboards, ad campaigns, or in store windows that they spent so much time, effort, and money on creating? You could find it in fine print on the company’s website, three clicks deep into the “About” page, but for the most part, I truly believe that Canadians had no idea. It was a huge public relations fail and an enormous missed opportunity that I think could have incentivized environmental and socially conscious people to shop there. It also would have justified the price increase that so many of my friends and previous customers struggled to comprehend.

One of many wedding guest dress looks from Le Chateau.

I was so excited to wear this 100 per cent silk dress to my mom’s wedding. I still have it.

Now, with the news of Le Chateau closing and liquidating its remaining 123 stores, I can’t help but think that this was the beginning of its demise as a major Canadian fashion player.

What set our customers apart from other retailers’ was that they were extremely brand loyal. Customers came into the mall knowing that they were going into Le Chateau to make a purchase for a special occasion or a night out at the club. It was a planned destination with an outcome that almost always resulted in a sale because of the urgency that surrounded the shopping trip. Le Chateau abandoned those customers.

As someone who hasn’t shopped there in over a decade, I feel like they abandoned me too. Many of the reasons why people shopped at Le Chateau were disregarded in their rebranding. At the time, Canada had enough Gaps, Banana Republics and Smart Sets – we didn’t need that. If the company had to cut costs, it should have been in reducing the size of their product line. That PK Book that I spoke of earlier was as thick as a bible, and we received one like clockwork, almost every two months. Options are rarely a bad thing, but when there are too many, design and quality often suffer and customers can easily get overwhelmed.

If you had to buy black pants 15 years ago, you went to Le Chateau because on any given day, they had 47 styles for you to try on. Most customer’s would settle on a pair after pulling on 10, but many would also give up after that same number. Hindsight is 20/20 and these are things that are easier to identify and discuss in retrospect. Would they have changed the outcome? Unfortunately, we’ll never know.

The morning I heard the news of their impending closure, I was in Niagara and felt compelled to go to the mall and visit the store that I spent so much of my young adulthood in one last time. It was the place where I had hour-long fashion shows after a shift, where I broke my toe with a bust form, and where I spent every cent (and then some) of my disposable income for the better part of a decade. It’s where I made lifelong friendships, polished my customer service skills, and endlessly experimented with fashion.

When I walked into the store, it didn’t matter what was on the clothing racks or that I no longer recognized the faces behind the register; the sadness that hit me consumed me. It really was the end of an era. 60 years is a long time and many will say that Le Chateau had a good run, but I just can’t help but wish they got one more chance to get things right, and that I kept that fur-trimmed cardigan. 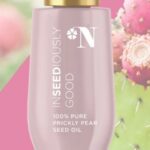 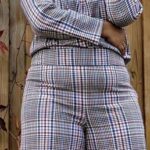