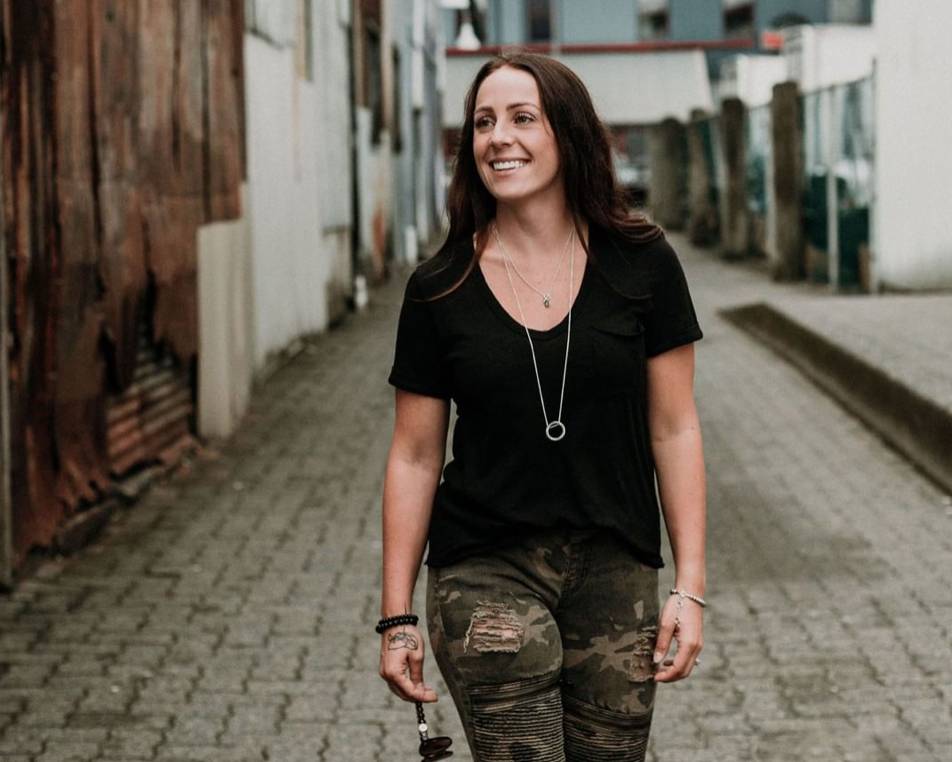 Recovering From And Remembering War With Military Veteran Kelsi Sheren, Founder Of Brass And Unity

By Anastasia BarbuzziNovember 11, 2020No Comments

In honour of Remembrance Day, STYLE Canada‘s Digital Editor, Anastasia Barbuzzi, caught up with Kelsi Sheren, founder of Canadian accessories brand Brass & Unity. Sheren is a Canadian military Veteran whose honourable discharge led her to jewelry making through art therapy. Today, Sheren spearheads a movement towards supporting Veterans across North America by donating 20 per cent of her company’s profits to military and veteran charities.

Scroll to learn about Sheren’s journey, her mission to destigmatize therapy after war, how she commemorates Remembrance Day, and so much more. 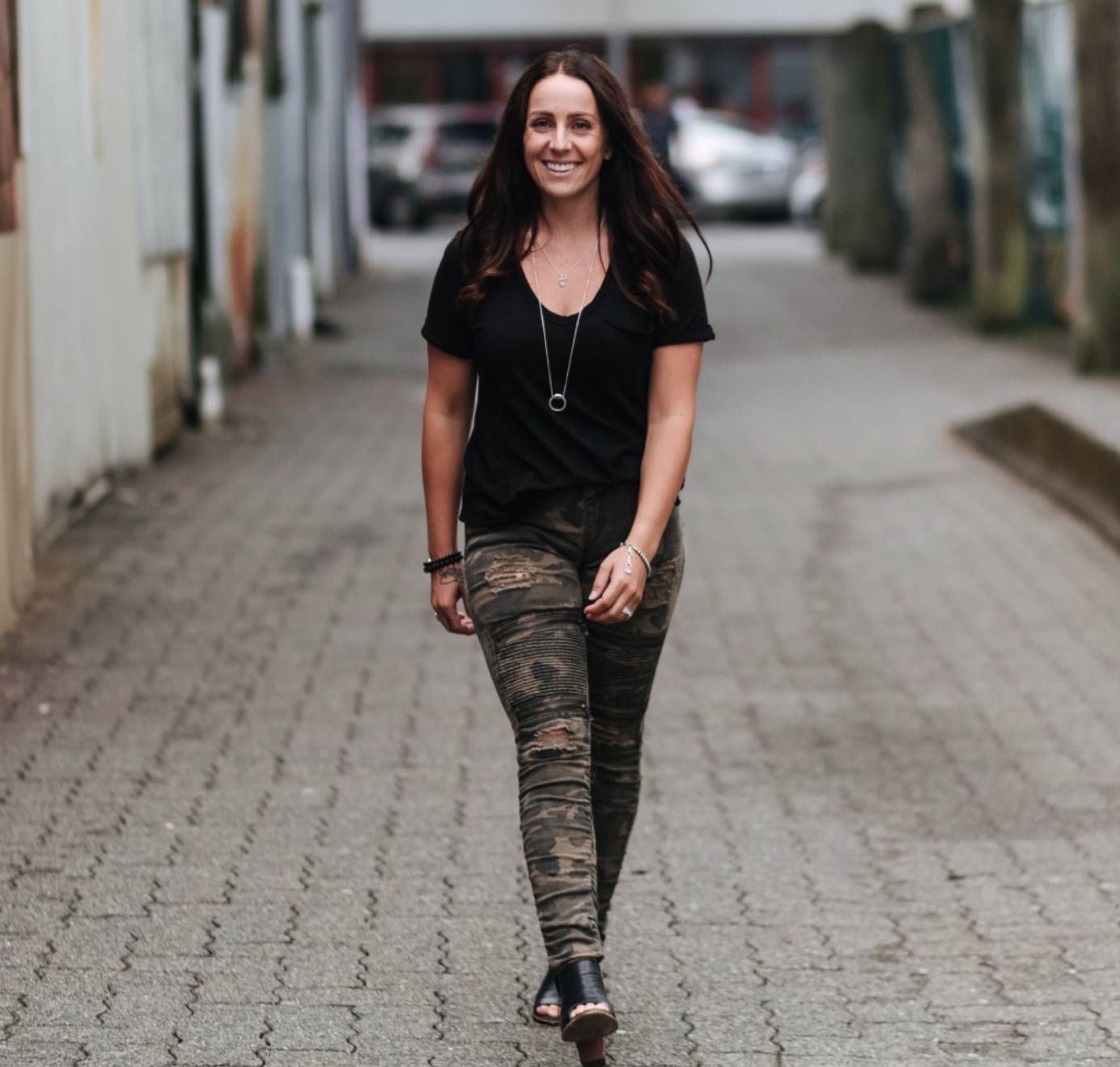 AB: Remembrance Day comes just nine days before Canada History Week. How critical have those who serve our country been to where it is today?

KS: That is difficult to answer because the fighting rarely happens at home. Soldiers are posted in many parts of the world doing many different jobs – they are all to protect our freedom here at home but it largely isn’t ever seen by the majority of the people here. I think so many take their freedom for granted, just thinking that it will always be there or that it doesn’t require a constant effort. Like the old saying, freedom isn’t free. I hope more people are able to appreciate that, and maybe just be a little kinder to everyone around them, and realize how good the majority of us are able to live.

AB: How do you honour your past in the Canadian military, the fellow soldiers and friends you’ve lost, and those that sacrificed their lives while fighting for our freedoms long ago?

KS: By remaining strong and continuing to fight for them every day. The ones close to me, and everyone else who lost their lives throughout the years. This is the reason my company exists today, and our entire mission is to help the soldiers, Veterans and first responders who need it most. We cannot bring back those we lost, but we can help repair their families, their loved ones, and hopefully prevent the loss of others to mental health issues, suicide, and so on.

AB: You famously went from “bullets to jewelry”, as Women’s World put it in 2018. What convinced you to join the military and what made you leave?

KS: I met a lady on a bus! Seriously, she was a badass female soldier from the old war time and she had a major impact on me. I dropped out of college and enlisted the next day. After I was injured in Afghanistan I was medically released from the military. I would have liked to stay in my career that I loved so much, but that wasn’t the path I was meant to take. 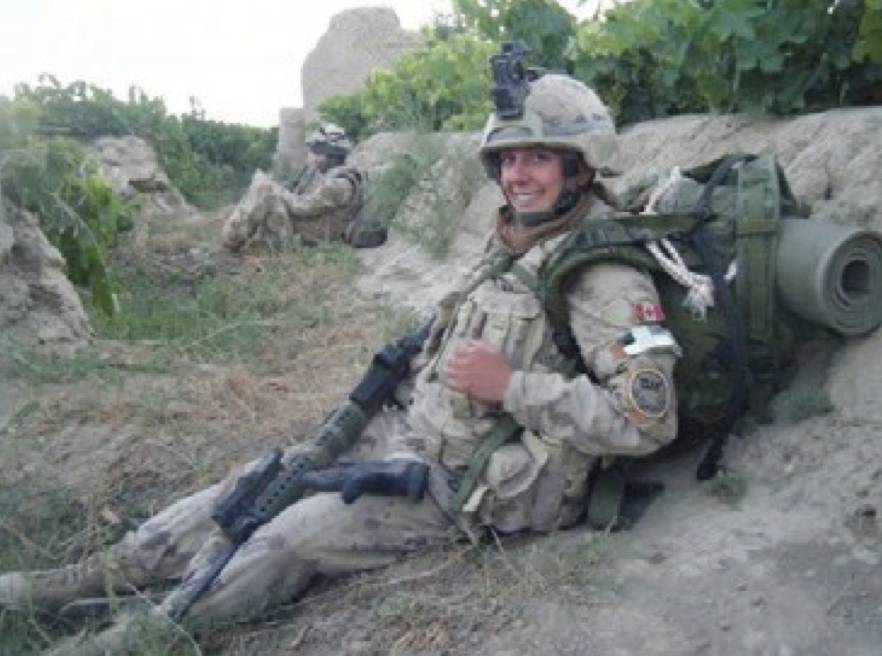 AB: You’ve been a fighter from day one as a practiced Tae Kwon Do athlete. How did your physical strength and presence as a woman in the military affect your experience?

KS: From four-years-old I was training, I was doing sit ups until I could see my abs. I obsessed over my fitness and strength. Both mentally and physically. This allowed me to go in with a bit of an edge I believe. I was very fit when I joined and that helped able me to do the job I loved which was artillery. Being a woman was different, but I did everything I could do to just be one of the guys. Because I was a woman I was in a situation where I was sent out to do a different job, and that happened to be the career ending op for me.

AB: You recently told FASHION Magazine that you never wore fashion jewelry before starting your own brand and that wearing sunglasses was the only way to personalize your uniform. This is ironic considering that your journey into art therapy led you to making jewelry, and now your sunglass designs are internationally recognized. What affect did stringing beads onto your “warrior bracelets” have on you? Were they a source of strength?

KS: Depending on the unit of course, it depended on what we could wear for sunglasses. The irony is great though. I love the warrior bracelet and all that goes into one. The work of stringing beads is more than a calming one, it’s more like meditation for me. It calmed me and took me out of my own head. It slowed my racing thoughts and helped me begin to cope. They became my therapy, strength, hope, and my reminder. They were a reminder to keep pushing forward each and every day.

AB: That venture into art therapy led to you found Brass & Unity, which owns the exclusive right to use spent casings in the design of jewelry and sunglasses. What does it mean to you to have this unique, patented symbol as a signifier of your brand?

KS: I love what the casings represent. We are taking something from war and turning it into peace. These symbols can have a profound meaning to people who wear them with pride, or as a memory of a fallen soldier, possible family member. It’s a way to connect people, it’s a way to take something messy and make it beautiful. Hence our name, Brass & Unity. In a way becoming a soldier is a lot like making the jewelry – the pieces start with bare metal, it must be beaten down, machined, drilled, and tumbled for it to take shape. Afterward, it can be polished and plated with a beautiful exterior, but this process can only happen after great suffering. I look at people the same way. When we survive tough times it makes us better. As long as we reach the other side, we will shine again. 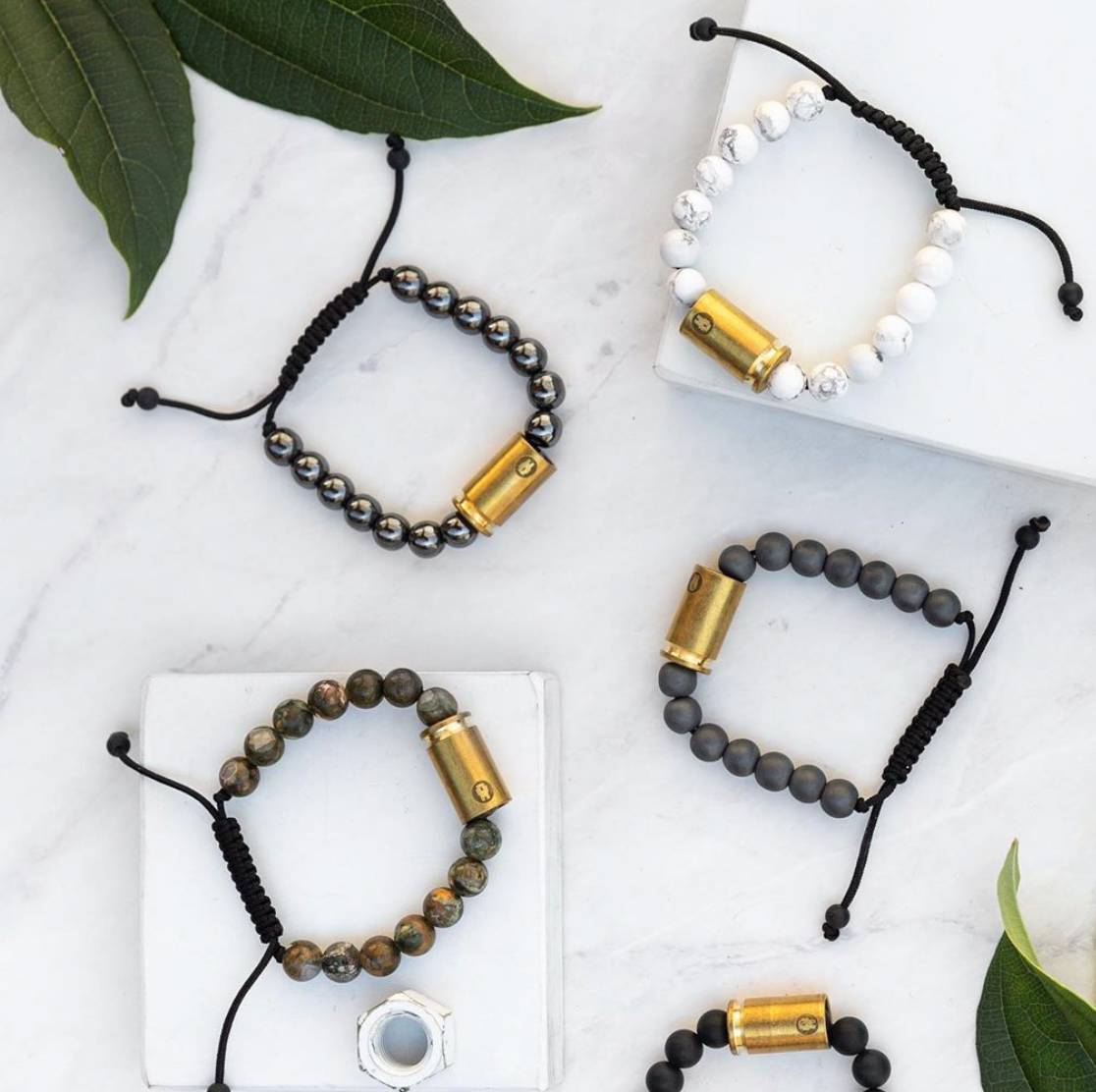 AB: Today, your company donates 20 per cent of its profits to a total of 26 charities between the U.S. and Canada that help rehabilitate Veterans for productive civilian life. What exactly are those charities doing to get Veterans back on their feet?

KS: Each and every single charity is different as to what resources they provide. They are spread out into mental health tools, therapy, limbs, rehabilitation, homelessness, and family resources. We try to spread the love around to make sure multiple paths have continued support. Veterans can have a wide range of issues and we just want to help as many as we can.

AB: Brass & Unity’s website states that approximately 12,000 people included in the Canadian homeless population are Vets. With Christmas and colder temperatures fast-approaching, what can people do to help a Vet without a home? How can they approach them knowing that they may deal with a mental health disorder?

KS: We always say reach out to your local veteran or first responder charity (often the Legion) but also Vets Canada, Honour House, Valour House, True Patriot Love, or Wounded Warriors Canada and ask them how you can help. They have their finger on the pulse of their local veteran community. Warm jackets, sleeping bags, socks, toques, and gloves are all great and can always be dropped off at a local legion if there’s no other veteran charity in the area. Also check out https://brassandunity.com/pages/veteran-assistance.

In a way becoming a soldier is a lot like making the jewelry – the pieces start with bare metal, it must be beaten down, machined, drilled, and tumbled for it to take shape. Afterward, it can be polished and plated with a beautiful exterior, but this process can only happen after great suffering.

AB: You do not draw a monetary salary from your company because you’ve said it gives you something much more valuable: a sense of purpose and a break from focusing on the horrors you witnessed at war. You’ve also said that Brass & Unity isn’t for you – it’s for friends, family, and anyone going through an “impossible situation”. Would you say your life in the military installed a sense of selflessness in you?

KS: Thats correct, money isn’t everything, it’s a lot of things but it doesn’t do what Brass & Unity does for me.. Brass & Unity is my mission. It keeps me grounded, focused and reminds me everyday that we can help more.

I’d like to think even before the military I was a selfless person, or at least tried to be. I’ve always wanted to look after those I felt were unable to look after themselves. Even before becoming a mother, I was always there for others.

AB: For anyone interested in or hesitant about trying something like art therapy, would you say that investing yourself in a distraction, no matter how difficult it may be, is an effective way to find a healthy escape? Where can people look for a place to start?

KS: For me it was art therapy, but that does not mean it’s for everyone! Each individual person is drastically different, they might find running or hiking great when some might enjoy painting or hunting as a healthy escape. No matter what, always remember to invest in your mental health. Even as little as going for a walk or sitting and having a coffee by yourself.
The best place to start is by standing up, moving, and just starting. Seriously.

AB: On your website, you describe how your jewelry pieces can be seen as more than just “perfect, shiny objects”. You see the entire journey of each accessory – they took great torture and great care to become beautiful. Would you say this sequence resembles your own journey?

KS: In many ways. I had to go through war, loss and despair if only to become the person I am today. I wouldn’t change a moment of that past, pain and great torture. But I also think this is true of many people. So many of us have demons in one form or another, and I hope this symbolism can be seen and felt by our customers. 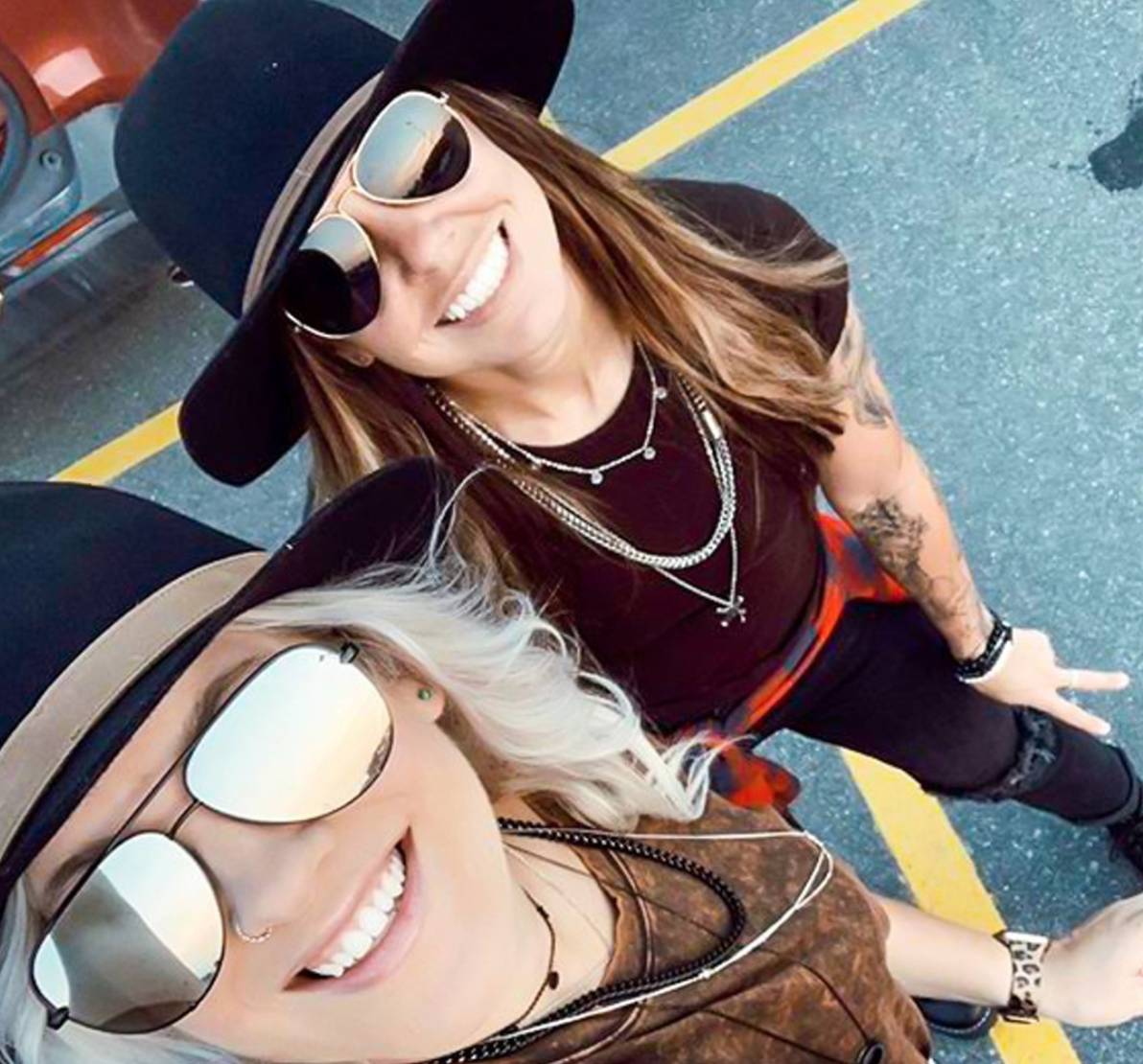 AB: It’s our sincere hope that your memoir, Brass and Unity, becomes a part of our Boreal Book Club. Besides detailing your experiences before, during, and after employing to Afghanistan, what else do STYLE readers need to know about the book?

KS: My memoir is so much more than my military career. It’s about resiliency at a time in my life when I was just a kid. The world isn’t always kind to everyone, the cards you get dealt can drastically change your life. I don’t want to give it all away, but there were multiple things that shaped me at a young age and ultimately prepared me for my military career. After that career, it was like starting from scratch again. Beat down and broken, I needed to basically rebuild my life but from a position where I no longer wanted to live. My goal is to hopefully inspire others; if you are struggling or it doesn’t seem possible, maybe pieces of my story will resonate with you or give you ideas of how to escape your own mind. Maybe they’ll help you move on, get motivated, and direct your energy in a positive direction again.

AB: If you had one wish for all the military personnel and Veterans out there this Remembrance Day, what would it be?

KS: I wish that those who are suffering in silence will suffer alone no more and reach out for help. I wish for them to not be afraid to say something when they’re not OK. You’re not weak for asking for help and you’re not less than for asking. You are human and war can damage you but it doesn’t have to break you. Don’t let the enemy win. You were strong enough to fight for others, now it’s time to fight for yourself.

Anastasia Barbuzzi is the Digital Editor at Style Canada.