Instead of learning in a typical classroom setting, founders of 6IX Academy Rebecca DiLeo and Kevin D’Souza are giving students the opportunity to be business savvy fashion designers.

6IX Academy is a social entrepreneurial program where students have the opportunity to work with Canadian fashion industry professionals on turning a design concept into a reality.

“There is no other program like this in Canada, possibly globally,” DiLeo said. On its fifth year running, the 6IX Academy is offered at Central Toronto Academy and is a part of the Ministry of Education under the umbrella of Specialist High Skills Major (SHSM).

In the past, the students have worked with the likes of Will Poho, Nogu Jewelry, George Sully, Roger Gingerich, Sully Wong, and many others. It’s also required that they incorporate social justice messaging in their design concepts. Some projects have raised awareness about bullying, missing and murdered Indigenous women, BLM and more.

“Students are obviously very invested in fashion and passionate about fashion and what they are wearing. They recognize the fact that they’re able to inspire their friends with what choices they are making in order to maintain a sustainable future,” DiLeo explained. “And that’s what we encourage. The students come up with the idea and the concepts, and we help bring their ideas to fruition through community mentorship opportunities.”

How The Program Works

First, students work with a community mentor and come up with a design concept. Then, they pitch it to the “Wolves Den”.

“The Wolves Den pitch is very much like the Dragon’s Den. We invite the whole school to come to the auditorium and listen to the pitches. The school decides which design they want to put into production,” said DiLeo.

Some students are involved in making the sketches and learning the technology like Adobe Illustrator or Photoshop, while business students help with the pitch itself.

“They get a lot of training and certifications like grant writing, how to pitch an idea, communications leadership, social media marketing, content creation, event planning, and inventory,” D’Souza said.

Once it goes into production, the students come together again to market the product. “They have to think about product photography, we create a lookbook, and we typically have a community-based event,” says DiLeo.

This year DiLeo and D’Souza approached Poho, the former CEO of Mooseknuckles and founder of Woodpecker Coats, about collaborating with the students on designing a Woodpecker jacket.

“He showed the students the parts that go into making a jacket, pattern design, and how to put it together. 60 students were involved and 25 different ideas were presented,” D’Souza said.

The group worked with a prototype and altered the exterior. In addition, they also created a textile design for the interior.

“We had to learn a little bit about embroidery, stitching, colours, and staying within a price point. There was the business side of it with expenses in regards to materials,” said DiLeo. “They had to come up with a social justice theme that was translated into the textile pattern, as well as the exterior colour, which had tie into their overall theme.”

In the end, Gingrich and Poho chose the winning design that went into production by 16-year-old Joey Donovan.

The Down the Pipe Jacket is an anti-pipeline themed jacket with a gender-neutral design. The exterior showcases water and purity while the interior features a cheeky patch design that was inspired by pro-pipeline protestors.

Donovan chose to shed light on Canada’s pipeline program in hopes that someone would create positive change.

“I chose pipeline awareness because I wanted an issue that is in your face. By picking an issue that is unique to Canada and under the control of the government, I chose a problem that had someone in charge. Someone who could listen and hopefully make a change,” Donovan said.

Check out the official Down the Pipe Jacket here! 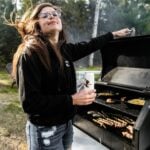 Previous: Summer BBQ Tools to Up Your Grill Game
Next: Casino dress code: What to wear and what can you learn from it