Welcome to STYLE Canada’s Boreal Book Club: a monthly meeting narrated by Erin Catto, (reviewer at Girl Well Read), for bookworms who’re looking to scour new pages. Since we aim to shine a spotlight on all things Canadian in life and style, beauty, and health and wellness, it goes without saying that every instalment of the Boreal Book Club will feature a Canadian author and their latest title.

This month’s feature is from STYLE’s EIC, Elise Gasbarrino.

The Sunset Sisters tells the story of Cassie and Julie, half-sisters born two weeks apart who’ve been estranged for fourteen years. In order to inherit their grandmother’s house in the Hamptons – the same house where at the age of nine, Cassie and Julie first met each other – they must spend a summer together.

As children, Cassie and Julie agree to keep their father’s affair with Julie’s mom a secret. But when they’re seventeen, tragedy strikes and the two young women stop speaking to each other.

Now, at 31-years-old, Cassie and Julie must spend an entire month together in the same home.

Both women are in difficult places in their lives. Cassie is a couples counsellor who grew up bearing witness to her parents’ unhappy marriage, which is why she vowed to never tie the knot herself. Except, she’s in love with a married man who used to be her patient.

Julie grew up confused by her mother’s role as the “other woman” and dreamt of marriage and stability. Except, now that she’s married, she barely recognizes herself.

The question rattling in both Cassie and Julie’s minds is how did I get here? And, of course, they both miss their grandmother.

That said, a grandmother’s power does not end with her death. Their mandatory stay at the Montauk house unleashes the regressive power of summer memories, forcing Cassie and Julie to confront their past and navigate their present together.

EG: First off, I loved this book. I couldn’t put it down and have since passed it to my sister and my mom. Where did the concept of the book originate?

CL: Thank you! As a reader, I’ve always been drawn to stories about dysfunctional families. (This may or may not be because my own family is quite dysfunctional.) A few years ago, my best friend married a man who had a half-brother born two weeks after him whom he’d never met. The notion that someone – anyone – had a sibling they’d never laid eyes on was both fascinating and disturbing to me. Partly, this is because I’m very close to my sister. But part of it was also that I’m preternaturally curious. I don’t think I’d be able to live with the knowledge that I had a long-lost third cousin (let alone a sibling!) without reaching out to them. It sounds dramatic, but it’s also true. Like I said: I’m a curious soul. Which is why I began asking him all sorts of questions about the brother he’d never met. He was kind enough to indulge me, and even kinder to put me in touch with his mom, a woman who endured my nosiness with a lot more grace than I deserved. From there, a story began to weave in my mind, one about two sisters, born two weeks apart, who meet when they were nine years old at their grandmother’s house. And I thought to myself, I want to read that novel! And so, I wrote it.

EG: The backdrop of Nana’s house is a big part of the story. Did you have a favourite place as a child that it was inspired by?

CL: Growing up, my grandmother’s house was my happy place. I was a very anxious child and my parents were very anxious people (not a coincidence, I’m sure). Unsurprisingly, being at home compounded my anxiety. But being at my grandmother’s had the opposite effect. Here’s the thing about my grandmother: she was perfect. She was all fluid motions and quiet serenity. Being around her slowed my restless mind, soothed my spirits. Everything she did was intentional and thoughtful. She was strong, too – and hers was a quiet strength, no doubt because of the world she was born into. My grandmother was proof that a hard life does not (necessarily) equal a hard heart. In case it isn’t clear, I adored my grandmother. As do Cassie and Julie — they love their Nana very much. And, growing up, her home was their sanctuary. The decision to set it in Montauk came from a summer I spent there. It was the first time I seriously considered writing a novel.

EG: Though The Sunset Sisters is fiction, the story of how Cassie and Julie’s relationship changes is so relatable. Did you draw the characters and their stories from personal references?

CL: In my author letter, I say, This story is fiction, but the emotions in it are real. To me, this sentence perfectly encapsulates the duality that lives inside this novel. Yes, Cassie and Julie are fictional characters – they are nothing like my sister and me. And yet, they are my sister and me. Not in the sense that she is Cassie and I am Julie (or vice-versa) but in the sense that the bond they share is so powerful that it shapes their entire lives. My sister is my best friend. She my baby (she’s incredibly mature and accomplished… and also very much my baby). Sisters share an uncivilized history. Anna and I are only two years apart. Neither of us had time to work on our personalities before we met. We grew up sharing all the versions of ourselves with one another. It’s a messy way to bond, but it’s also effective. And, from an early age, we figured out that we were better together. Do you know how people are often commenting on who is their parents’ favorite? Anna and I never wondered about that. We were each other’s favorite. When I set out to write a book about two sisters, I wanted to emulate the inimitable closeness of our relationship. It was tricky, though – Cassie and Julie met when they were nine and they only spent summers together. How would they grow close? And then came the idea to give them a secret to share – one they’d have to keep from everyone, including their parents. Especially their parents. Secrets are an effective way to bond.

EG: Since this is your first novel, can you tell me about the writing process?

CL: I have no idea whether I’m a good writer. Like so many writers I know, when I reread my work, I think it’s awful. But I know I’m a devoted reader – I’ve been devouring novels since I can remember. And that’s how any writing process begins: with reading. After that, pretty much anything goes. But being an avid reader is non-negotiable.

When I began writing The Sunset Sisters, I didn’t know what I was doing. (I am not purporting to know what I am doing now). But I knew what I wanted my book to look like because I’d read so many books before. And so I wrote. I wrote with abandon and without fear because I was writing for myself. I wasn’t concerned with what anyone would think of my pages because I didn’t think about showing them to anyone. I was writing a story I’d want to read. Once I had a first draft (kindly note that I did not say a good first draft as I believe that to be an oxymoron), I applied for a spot in the Curtis Brown Creative online novel-writing course under the tutelage of bestselling novelist Lisa O’Donnell. Once I was accepted, I started panicking. The course involved workshopping my book which meant that people – actual humans! – would read my work. The panic never went away entirely, but, as the weeks went by, it became more manageable, all thanks to Lisa’s guidance and encouragement, as well as my peers’ support and feedback. I cannot recommend this course enough. The Sunset Sisters wouldn’t exist without it.

EG: I noticed that The Sunset Sisters is part of “The Sisterhood Series”. Is there another novel coming soon?

CL: Ah, that’s very kind of you. The answer is: yes and no. The Sunset Sisters is a standalone novel in the sense that Cassie and Julie’s story has come to an end, but they ‘live’ in the same universe as my other stories. My second novel, The Faithfuls, comes out in September – it’s filled with family secrets and juicy drama. And Cassie (from The Sunset Sisters) is the couple’s counselor of two characters in The Faithfuls.

Get your copy of The Sunset Sisters here. 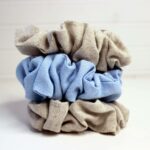 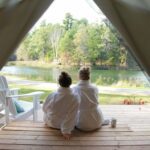 Next: #SummerFridays At Whispering Springs