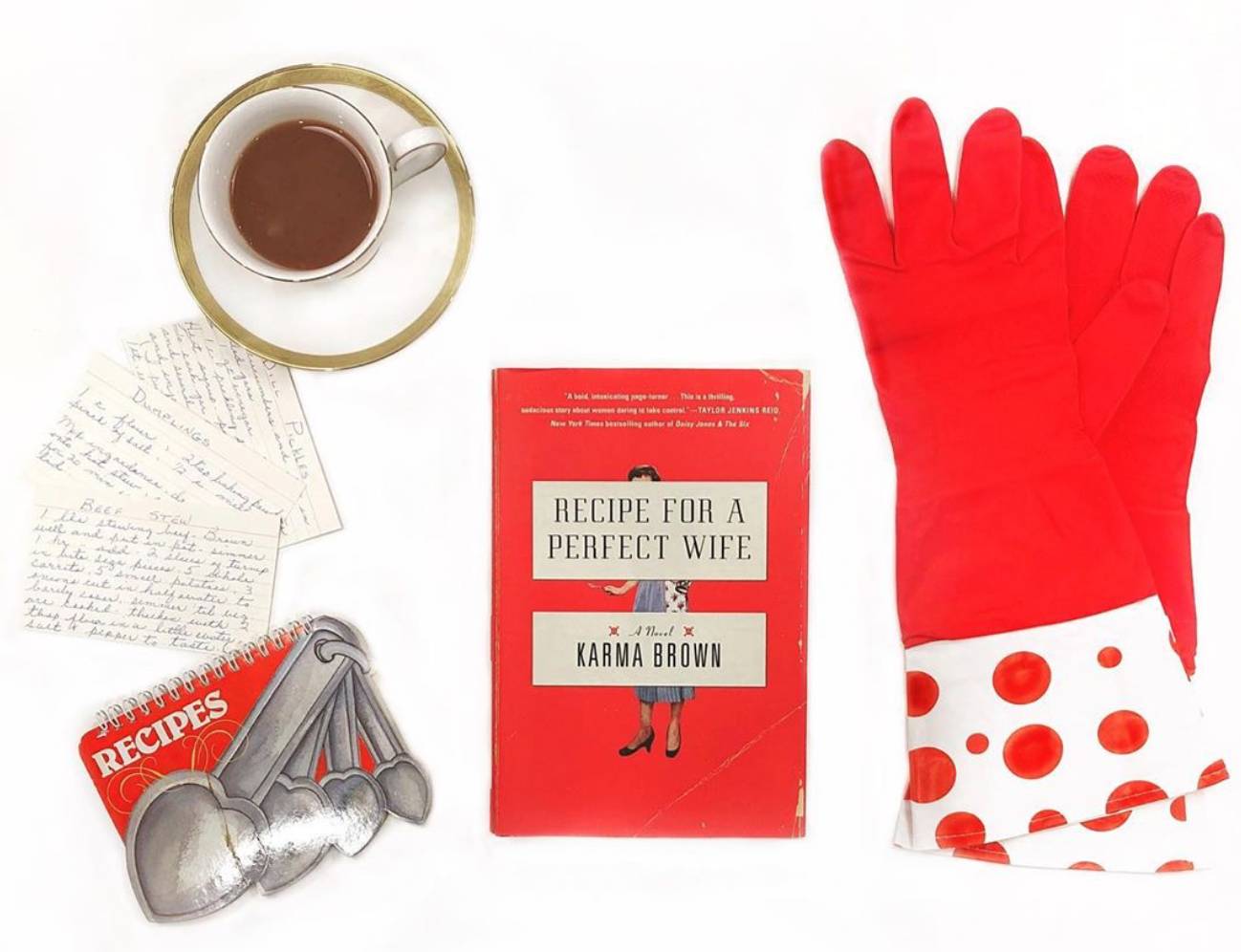 Welcome to STYLE Canada‘s Boreal Book Club: a monthly meeting narrated by Erin Catto, (reviewer at Girl Well Read), for bookworms who’re looking to scour new pages. Since we aim to shine a spotlight on all things Canadian in life and style, beauty, health, and wellness, it goes without saying that every instalment of the Boreal Book Club will feature a Canadian author and their latest title. Be sure to use the hashtag #BorealBookClub to share with us on social!

Recipe for a Perfect Wife by Karma Brown is a dual narrative novel wherein a modern woman finds new inspiration from a 1950s housewife’s cookbook and handwritten notes. Alice Hale left her career in publicity, the city she loves, and finds herself in the suburbs attempting to write a book. In the basement of her fixer upper home, she uncovers a well-loved cookbook and within its pages, notations and handwritten letters. She comes to learn that they’re written by the previous owner, Nellie Murdoch.

With an affinity for Nellie, Alice starts cooking her recipes and wearing vintage clothing. In the process, she uncovers a dangerous side to Nellie’s marriage and comes to the realization that she too is unhappy with the pressures in her own relationship. Alice begins to take control of her life and like Nellie, arms herself with a few secrets too.

The chapters alternate between Nellie’s narrative, and Alice learning about Nellie’s past which she uses to frame her own marriage. Nellie’s chapters begin with (often shocking) marital advice, whereas Alice’s open with recipes from the cookbook. I adore Brown’s writing and this book delivered. Both storylines are equally well-written and engaging, and I found myself completely immersed in the narratives without favouring one over the other. The characters are highly developed and complex, yet there’s an intimacy that the reader feels with them. Alice and Nellie have tremendous depth and incredible strength.

What I appreciate most about this book is Brown’s ability to tackle some weighty and timely topics like the privilege of white men, inequality, misogyny, abuse, and reproductive rights. Recipe for a Perfect Wife is a comment on how women are confined by the limited number of choices they have, in order to conform to what’s expected of them. True to Brown’s writing style, the novels conclusion isn’t wrapped up with a bow and presented to the reader. Instead, she leaves her audience with a bit of closure and a lot of pondering. I recommend making Recipe for a Perfect Wife your #QuarantineBookClub‘s first choice.

Purchase your copy of Recipe for a Perfect Wife or keep reading to learn more about Karma Brown in an exclusive interview with STYLE Canada.

Thank you @cityline and @thetracymoore for choosing RECIPE FOR A PERFECT WIFE for your next #citylinebookclub pick! Such a thrill 🥳 #authorsofinstagram #recipeforaperfectwife #readthenorth #womenwriters #historicalfiction #bookclub #bookstagram

SC: Can you tell me a little bit about the research you did for Recipe for a Perfect Wife?

KB: I’m a former journalist, so sourcing people, things, quotes…it’s my go-to. But this novel was my first stab at writing historical fiction and I knew the research would be more intense, as I wanted those 1950s sections to feel authentic. A lot of the research was anecdotal – I had many conversations with my parents and read first-hand accounts of life in the 1950s – but I also watched dozens of home economics videos from that decade, and went through stacks of old magazines and newspaper clippings from that era. Finally, the recipes: though I didn’t make all of the recipes in the book (I’m a vegetarian, so meatloaf is never on the menu), my daughter and I tackled a handful. Most impressively, the Baked Alaska!

SC: What’s the inspiration behind Recipe for a Perfect Wife?

KB: My mom gave me a few vintage cookbooks that had been passed down through our family, and there was one in particular – a Canadian cookbook called The Purity Cookbook from the 1940s – that inspired Nellie’s 1950s character. I had a clear image of Nellie, smoking one of her cigarettes out in her beloved garden, flipping through this cookbook and searching for a dinner recipe. Her life looked simple on the surface – the quintessential housewife – but I knew underneath the façade there was a lot more to Nellie. Everything started from that one scene, actually.

SC: Do you have a favourite character?

KB: It’s impossible for me to choose, to be honest. Though I will say I loved writing the two older women – Miriam in the 1950s and Sally, her daughter, in the present day – into the story. They both acted as surrogate mothers for my main characters, Nellie and Alice, and offered wisdom, kindness and guidance for these younger women.

Without my agent @cforde_litagent and these three amazing publishers— @duttonbooks, @penguinrandomca, @legendpress — this book would not have found all the readers it has (so far)! RECIPE FOR A PERFECT WIFE has ticked a lot of bucket list boxes, and I am grateful to all those who helped it grow wings. #thankfulthursday #authorsofinstagram #bookstagram #historicalfiction #writersofinstagram #bestseller #booklife

SC: One of my favourite quotes in the book is: “Sally, the hardest question we have to ask ourselves in this life is, ‘Who am I?’. Ideally, we answer it for ourselves, but be warned that others will strive to do it for you – so don’t let them.” It’s so powerful. Did you receive this advice at some point in your life?

KB: It isn’t advice I received, but something I saw one afternoon when I was procrastibaking (procrastinating via baking) and watching Netflix. It was a soapy FBI show, and the main character, who was struggling to find her footing, was told to ask herself who she wanted to be. I immediately went and wrote it down… because it was a perfect theme for the book and precisely the advice I imagined Sally imparting to Alice. Who says bingeing Netflix can’t be considered, ‘working’?

KB: I research every book I write, and whether it’s a setting or a character’s career or a medical condition, there’s always so much to learn. But with historical fiction it wasn’t only accurate details I had to worry about. It was also capturing the flavour and ambiance of the decade – including language, fashion, social norms – and being able to translate those on to the page. It was a challenge, but it was fun and I loved every bit of it.

SC: Each of Alice’s chapters open with a piece of advice from various publications. What surprised you most about these?

KB: Aside from the fact that they even exist? Probably how widespread and longstanding this misogyny and inequality really was… and in more subtle ways, how it continues today. There are snippets of advice from the early 1900s up to the 1960s… and in all cases the general consensus was this: a woman only gets to be happy if she makes a man happy first.

Another author/book milestone—my @kirkus_reviews is up…and I’m thrilled to say it’s a great one! Thanks Kirkus for this amazing review, which you can read in its entirety over at www.kirkusreviews.com. Not long now, friends—out January 21, 2020 (but you can pre-order now). #authorsofinsta #bookreviews #RecipeForAPerfectWife #readthenorth #authorlife #writersofinstagram #kirkusreviews #comingsoon #readthenorth

KB: There’s a scene with Nellie and her husband Richard that takes place in their living room, and it’s violent and tragic and awful, yet I know many women in those times endured similar situations. As a woman it was a tough scene to write.

KB: I have a non-fiction book coming out with HarperCollins Canada in December 2020 called THE 4% FIX: How one hour can change your life, and it delves into my 5 a.m. writing habit, as well as how protecting your time is the best investment you can make. And I’ve just started working on my next novel, which is set in the Adirondacks and again will be a dual narrative story shifting between the 1970s (and the second wave of feminism) and the present day. Look for that one sometime in 2022!